A lot has been said about the Ardbeg Supernova. First there was the announcement shortly after the Bruichladdich Octomore. Then there was the Committee sale that ended within 2 hours after its start. Now there is the general ‘Stellar’ release which is still rather short in supply.

As you know, it’s the peatiest Ardbeg to date at over 100 phenolic parts per milion. 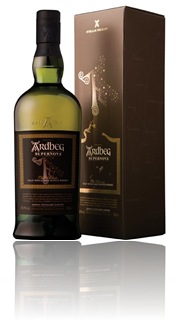 Nose: gristy, tarry peat. Smokier than the Ardbeg 10yo (duh). Very earthy but rather sweet as well. Some lemon. Camomile and heather. Tobacco and espresso. Nice.

Finish: lovely espresso with a little chocolate. Some citrus. A pinch of salt and slight hints of rubber. Endless peat smoke.

A powerful cask-strength Ardbeg. Maybe less extreme than expected and a tad less “experimental” than the Octomore, but that’s not necessarily a bad thing. Around € 85.