Since 2005, The Macallan and French glass designers Lalique have been working together on an exclusive series of limited edition decanters as part of Macallan’s Six Pillars collection, based around six specific characteristics of the distillery. The fourth decanter is called “curiously small stills” and finds its inspiration in the riveted opening of the stills. As a refined detail, the stopper was cast using copper from decommissioned Macallan stills.

Inside the exquisite Lalique bottle is 60 years old whisky obtained from five sherry butts filled on the 9th and 10th of November 1950 and produced from a mix of American and Spanish oak. It is meant to be a collector’s item (more than a drinker’s whisky I suppose) so the production is restricted to only 400 bottles. 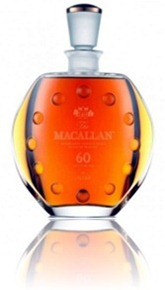 Nose: a little to my surprise, quite amazing. Is it a drinker’s whisky after all? It has an excellent ethereal quality and starts mostly on herbal elements (eucalyptus, rosemary, fir tree honey, parsley) and precious waxed oak. Cinnamon. Classic dried fruits from the sherry, but it develops some lovely fresh fruity notes as well, mainly oranges, apricots and rhubarb. Even tangerine and melon. Very light smoke but not as much as we would have expected from a 1950’s distillate. Wonderful freshness overall.

Mouth: quite full, with more or less the same development. Starts herbal, slightly earthy even and then evolves on dried fruits and toffee. Oranges. Sour plums. Then espresso notes and a nuttiness (peanut butter?). Chlorophyll. A light sourness of pipe tobacco. Walnuts. The tannins are present but they’re well controlled given the age. A light peatiness in the background?

Finish: not extremely long but not overly dry, mixing fading fruity notes with mint and resin.

Unfortunately I didn’t have a sample big enough to grasp all layers and unravel its complexity. On the other hand it was big enough to know that this is fabulous whisky: it’s about much more than just a nice bottle and a marketing story. It’s extremely old but also surprisingly fresh and fragrant. Around € 20.000. A medium-sized car indeed. Thanks for the sample, Jack!