Beside the nog! gin, Asta Morris also has a new whisky coming up: an Imperial 1995 sourced from the Signatory stocks. 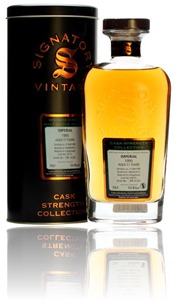 Nose: nice entrance on aromatic orange peel, which unfolds towards tangerines and lime. Apples, mint. After a while also hints of marzipan and vanilla. Some honey. After some time it adds marshmallows and waxy notes as a bonus to an already convincing nose.

Mouth: while you could say the nose showed a rather generic bourbonny Speyside profile, this definitely takes it up a notch. Sweet and rounded, with a slightly tropical side and plenty of fruit liqueurs. Coconut and pineapple, tangerine, pink grapefruit. Tinned apricots. These waxy notes again and a few gingery touches. Cinnamon. Maybe a chalky note. Lovely, and it goes down way too easily.

Finish: medium long, still fruity with some green oak and a hint of fruit tea.

Simply a very good Imperial and certainly the best 1995 I’ve had so far. On the palate this is really 90+ material. If only the nose were a little less predictable. One of my favourite Asta Morris releases so far – recommended. Arriving in stores over the next few weeks. Around € 100.