Remember Kininvie lacked mash tuns back then, it received its mash from Balvenie so it was a set of stills rather than a proper distillery. Now it has been expanded so it can operate on its own.

Since a few weeks there’s also a Kininvie 17 Year Old, available in travel retail, also released in batches, with the same cask distribution and the same bottling strength. 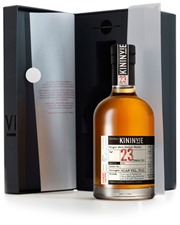 Nose: warm vanilla and almond cream. Sweet stone fruits, apples, peaches, orange juice and a hint of kiwi. Floral honey, golden syrup and a balanced dose of sweet oak and gentle spices. This profile is elegant and very similar to Batch 001, only a tad less spirity this time. Very good.

Mouth: really sweet again, candied and creamy. Oranges and peaches. The oak begins to rise, alongside spices like ginger and nutmeg, as well as grapefruit zest. Becomes quite grainy and slightly harsh in the end (a blend-like touch that I also found in the first batch).

Batch 002 is better than Batch 001 and we can get it at a normal price, contrary to the previous batch which had to come from parallel import. In the end I still have some trouble with the grainy notes though. Around € 125.