This is the latest version of Port Askaig 30 Year Old. The first release in 2009 adopted the classic (Talisker) 45.8% strength, followed by a cask strength edition in 2012.

The 2015 release returns to the Talisker strength and now comes in a wooden box, the same as its brand-new sister Port Askaig 45 Year Old. It is matured in American oak casks.

While the first Port Askaig releases where always firmly hinting towards Caol Ila, this is now questioned, especially for the oldest expression. The profile seems to have changed a little and it is indeed unlikely that Caol Ila casks filled in 1970 or before can still be found. Bunnahabhain is probably the only Islay distillery with stocks from that era, so this shouldn’t be a secret. For the 30 Year Old, I don’t think changes were necessary. However recent messages from TWE have indicated there is whisky from three different Islay distilleries in the current line-up, so you never know… 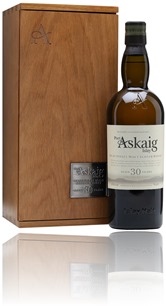 Nose: maybe things are different for the 45yo, but this still seems Coal Ila to me. A subtle, elegant version, with all the classic elements like lime, pear and banana bread. Soft coastal notes, paint, hints of camphor. Minty notes and embering wood logs.

Mouth: fairly gentle again, but with more medicinal notes and minerals. Linseed oil, kippers, kelp and lemon. Hints of waxed paper and apple peelings. Soft chili and a drier, oaky note. Just a hint of honey in the background.

Finish: dry, rather long, with lingering smoke, liquorice and a vague sweetness.