A new Ardbeg is always something to look forward to. Ardbeg Corryvreckan replaces the Airigh Nam Beist and has already been announced in the UK (check Tim’s notes), but yesterday was the official launch date. The Committee version was received very well last year, so the general release promises to become a real hit (altough it’s a different batch).

Ardbeg Corryvreckan (named after a dangerous whirlpool in the seas near Islay) is composed around batches of spirit matured in first-fill French oak casks. They should give this whisky enough sweetness and spiciness to compete with the peat. 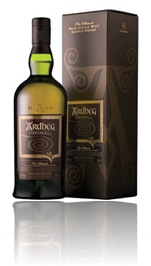 Nose: sweet peat smoke mixed with lemons, fresh kumquats but also slightly overdue oranges. Walnuts and wet wool. A few grassy notes and hints of heavily toasted bread. Roasted nuts and a few spicy notes emerge after a while (pepper and ginger). I even picked up hints of violet candy which is quite remarkable. They were gone quickly, but it proves the Corryvreckan is indeed a real whirlpool of flavours.

Intense and powerful, no doubt about that, but balanced as well. Less peaty than Ardbeg Supernova but punchier / rougher than the Renaissance. Probably my favourite expression in the current Ardbeg range. Around € 70. Oh, and I really like the “no swimming” joke on the box!