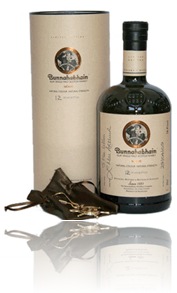 Mòine means “peat” in Gaelic. There was
a similar bottling for Feis Ile 2004.

Nose: starts off with a coastal kick. Salty and slightly sharp. Peaty with big roasted undertones (cocoa, espresso, bread crust). Sweet coal smoke with a delicate lemony edge. Hints of paint. Reminiscent of new-make. Rather weird and slightly off-key. The Lindores guys thought it was immature, which is correct, but I still appreciate it for being different and for having this “dark” side.

This may not have been the highlight of Feis Ile for some people, but I think Bunnahabhain proposed something unique here. Not new-make but not mature whisky either. Love it or hate it. By far the worst value for money of this year’s festival though (€ 120 for a 6 year-old?).