Ardbeg distilled in 1975 is usually quite stunning. But not always… 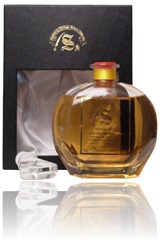 Nose: gentle start with mellow peat and a softly honeyed sweetness. Then it takes off in two different directions. There’s a medicinal / maritime side, quite nice, with seaweed, antiseptics and menthol. The other side is lemony but also a little fragrant and flowery. Overall very good but maybe not stellar like other 1970’s Ardbeg.

Mouth: a bit too soft. Lemony and oily. Smoke, some earthy peat. Picks up strength but also less impressive notes, a mix of bitter oranges and soap. Bugger. Not as bad as Bowmore 1980’s kind of soap, but not what we were expecting either.

Finish: rather long and warm, but by now I can’t focus on anything else but the soapiness.

One of the least impressive Ardbegs I’ve ever had. The nose saves it from a 70’ish score.