This Glenfarclas 1953 was one of the big releases everyone talked about in 2012, for different reasons.

Firstly because it was the oldest cask Glenfarclas had lying around (58 years old no less). At that time at least, its sister cask #1675 was bottled a bit later in 2012 as part of the Family Cask series, and just a couple of weeks ago Glenfarclas announced a third 1953 single cask (nearly 60 years) which they bottled in pair with a 1953 Hine cognac. I believe another 1953 cask will be bottled later this year, and after that one cask is still in the warehouses, so there’s more to come.

Secondly because it was bottled for WealthSolutions, a Polish company that provides alternative solutions for people’s wealth (yes, such a problem sometimes). Michal Kowalski, vice president, has a weak spot for art, primeur wines and whisky. This Glenfarclas – selected with the help of Serge Valentin and other insiders – was their first venture into the world of investment whiskies. In the meantime, they’ve also bottled a Karuizawa 1964. Of course it saddened the whisky community that these whiskies were openly sold for their potential rise in value. They feared it would probably never be savoured properly, merely “transactioned”, but let’s face it, they were never within reach of a normal whisky enthusiast anyway. Also, it has to be said that they’ve surrounded the release with a lot of information so that buyers are at least educated and invited to taste.

Thirdly, but you may not have heard about this, because WealthSolutions generously distributed a couple of dozens of samples for reviewing (thanks guys!) but some of them popped up in online auctions. That’s certainly against their intention to share this exceptional dram with enthusiasts.

The cask itself, an American oak sherry cask #1674, was filled on 20th November 1953 and bottled on 13th February 2012. It comes in a beautiful wooden box, together with a special book by Ian Buxton. 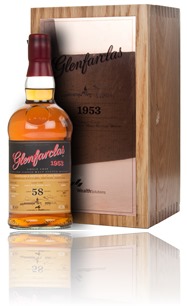 Nose: surprisingly, not the oldest feeling nose in this little series. Yes, there’s a certain metallic sourness, but it overcomes that with a nice sweet & sour fruitiness of orange peel, apricots and passion fruit. Also a kind of waxiness that you can only get at high ages, in between precious polished woods and lipstick. Also the usual slight leafiness, mint and resin. Hazelnuts and almonds. An impressively noble oldness.

Mouth: oily, partly fruity, partly floral at first. The apricots are back, with garden fruits, but it shows only a very light sweetness. It’s more of a fruit tea palate. The whole is rather leathery, nutty and spicy. Cashews, fresh peppercorns and ginger. Liquorice towards the end.

Finish: pretty long considering the age, with the dryness of cinnamon powder and a pleasant warmth of toasted oak.

Impressive to say the least. It’s not enough to buy any old cask and think it will be a great investment because it’s old and rare. It has to be the best of its kind as well, and indeed that’s probably what it is. Around € 8500, only available from Master of Malt.