The Macallan 1824 series is in the eye of the storm when it comes to recent evolutions in the whisky industry. After years and years of telling customers that colour didn’t matter (as it could be faked) and that more mature was better, they are now claiming the opposite, releasing No Age Statement whiskies that are named after… their colour. Quoting the press release:

Is The Macallan wrong? Not entirely at least. Of course the colour of a whisky – when not troubled by caramel – does tell us a few things about its maturation and possibly also its taste. And of course a 20 year-old can be as mature as a 30 year-old. But in the end it is a symptom of declining old stocks, thus a need for creative marketing in order to sell a younger spirit that tastes like older spirit, preferably at a higher price than the age would justify.

It’s a fact that consumer education (or confusion) is sometimes tricky, and focusing on colour may backfire as it’s not a linear element like age. Obviously using only first-fill sherry casks (like Ruby) will give you a lot of colour in no-time, but refill casks (part of the recipe of the other three) can be a lot more complex and elegant. Moreover, while the concept of colour sorting may work within the Macallan range, you will find other first-fill drams darker than Ruby sitting in the same shelf, with an old-fashioned (comforting) age statement as a bonus, and some of them at half the price.

Speaking of price. It’s easy to say older whisky is more expensive: it takes more investment, more care, and it’s more rare. But in this case, theoretically Ruby could be a younger mix than Sienna. On what grounds will they claim it should be more expensive? Because the distillery thinks it has a better taste?

Anyway it’s a complex matter – we’ve only scratched the surface here – and it’s not a move without risk for the distillery. Let’s see what the resulting whisky is like. The Macallan Ruby is the oldest darkest of the series, after Gold, Amber and Sienna. It is aged exclusively in first-fill Spanish oak sherry casks. 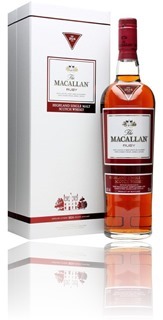 Mouth: not too punchy, some honey and red berry notes but mostly spicy notes. Nutmeg, cinnamon, ginger and soft pepper. Soft tannins from the oak too. Still some zesty oranges and raisins, but less fruity than the nose suggested. Fades on toffee, chocolate and something of apricot syrup.

Finish: quite long, spicy with oranges and lingering apricot.

The Macallan Ruby is a decent, modern dram but I wasn’t entirely convinced of its premium status. I’ve had NAS drams with a similar colour that had a fuller body and more juicy fruits on the palate. Hey, even an entry-level Macallan bottled in the 1990’s held more quality sherry inside. Around € 140 – too expensive in my opinion.