Another one I discovered at the recent Whisky Festival in Madrid. I had a chat with Willie Tait from Jura distillery and he offered me a dram of the latest “profoundly peated” Isle of Jura Prophecy. It’s a limited release of around 10.000 bottles with new batches expected every year.

It’s a mixture of casks with different peat levels and peat styles, finished off by a 1989 oloroso sherry butt from Gonzalez Byass. It’s non-chill-filtered but coloured with caramel, I’m afraid. 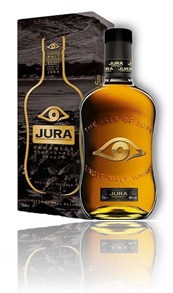 Nose: good integration of the sherry and the peat. There’s smoke (burnt leaves) but it’s not as profoundly peated as I would have expected. Slightly tarry and even some medicinal notes. Everything’s rounded off by dried fruits, chocolate, hints of cinnamon, nutmeg and oranges. A bit uncommon as a whole maybe, but very enjoyable.

Mouth: much more peat now. Starting slightly sweet with fruity notes but soon getting (a lot) drier and spicier (pepper, cinnamon). A good deal of smoke. Overall punchy and clean.

This new Jura Prophecy is a nice dram and although it’s typically Jura, it presents a new profile at the same time. Around € 55.