You may have noticed that we’ve had a lot of very old whiskies lately, with very high scores. It’s simply the time of the year. The Whisky Fair, the Fulldram supertasting, the Weedram Masters in two weeks… these events have a big focus on exceptional old stuff. And of course we’re more excited about a
Glen Keith 1970 than the next Glen Wonka 2000.

We were stunned by the Glen Keith 1970 released by The Whisky Agency
a few months ago. Now Malts of Scotland has a similar bottling, probably from a sister cask? This one is slightly darker, more golden coloured. 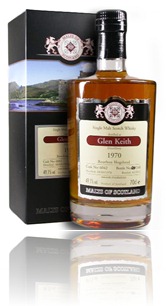 Finish: more of the same really, softly oaky and citrusy backed by spices.

Wow, another Glen Keith 1970 of exceptional quality. Personally I think this one has the better nose and the TWA version has the better palate, but differences are very very small and both are exactly my style. Great if you missed out on the other one. Around € 200.