Kilchoman Spring 2011 is the sixth seasonal release already. It’s a vatting of 70% 3 year old and 30% 4 year old casks. Both were matured in first fill bourbon barrels, but the 4 year old spirit has been finished in oloroso sherry butts for five weeks. This means the formula is similar to the Autumn 2009 release although the colour suggests there should be less sherry influence.

As stocks and batches are probably getting bigger, this will be available for a longer time and there won’t be other seasonal releases in 2011. Kilchoman made a few other announcements for the rest of this year: 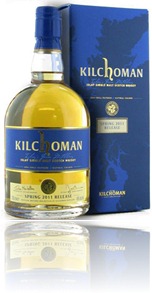 Nose: sweet peat mixed with fruity notes. The peat is maybe not as heavy as you would think. Ashes and tarry ropes. Soaked grains. Pear drops and kiwi. Pencils. Quite good.

Mouth: sweet and oily, but the attack is remarkably “open”, as if it only starts to speak after ten seconds. Not much grip, so to speak. After that, it gets briney and peaty. The aftertaste is more fruity again.

Finish: smoky and rather earty, with hints of olives.

Well, it seems to go up and down with these seasonal releases. I like the bourbon releases better, no doubt about that. Especially the attack of this release disappointed me.
Around € 45.