Big Peat is a regular amongst the heavily peated blends. This cask strength Islay blended malt includes Ardbeg, Bowmore, Caol Ila and Port Ellen – I suppose this last distillery still helps it fly off the shelves although it may be a very limited amount. It also includes two other malts from the south side of the island (Laphroaig and Lagavulin).

Like last year, Douglas Laing created a Big Peat Christmas Edition. It’s supposed to be an even more wintery version. 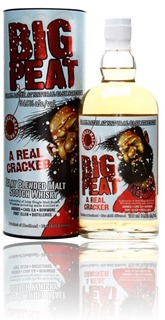 Mouth: very peaty again. Pepper. A similarly young (synthetic) pear fruitiness. Some rubbery notes and tar. Quite some medicinal notes as well, and a hint of black coffee and cocoa towards the end. Rather straightforward.

Finish: long, with some liquorice and ashes.

It didn’t impress me as much as the original Big Peat, but it’s still a nice Islay vatting, just a little youngish. Around € 60.