Bushmills 1608 is a blend of three different spirits: Bushmills’ own triple distilled malt whiskey with a lighter irish grain and a malt whiskey they made using crystal malt – a caramelized version of the normal malted barley. Maturation takes place in bourbon and sherry casks.

After the initial 2008 release, new batches have been made available so it’s still around and not as rare as it may have seemed. Bushmills 1608 was named Best Irish Blended Whiskey (No Age Statement) at the World Whiskies Awards twice, most recently in 2012. 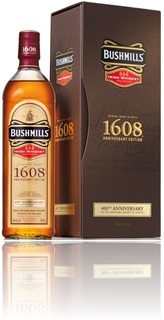 Nose: maybe not as exuberant as some other Irish malts. Quite malty actually, with the fruits on a second level. A bit of banana and peach. Plenty of honey. Also drier notes: walnuts, fresh grass and green tea. Some leather. Inviting but a tad low profile.

Mouth: sweet, with more of the typical (tropical) fruits. Apricots, pink grapefruit and tangerine. They make place for more generic, blend-like notes. Grains, toffee, honey. Some zesty notes. Hints of vanilla and coconut – that must be the grain whiskey.

A fine Irish dram, though maybe not an absolute must-try example in my opinion. Around € 50.