The Walsh Distillery which is behind this blend, started as an Irish coffee and Irish Cream producer – for which they bought whiskey from Irish Distillers (Jameson). It was not until 2007 when their first Irishman whiskey was presented. Writers Tears was created in 2009. Here it’s presented at cask strength, a limited yearly release. If I’m not mistaken, they are now building a new distillery to support the expansion. 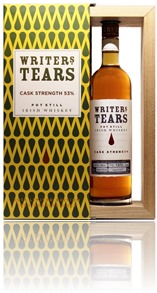 Mouth: almost entirely on peach and banana now. Very candied, a bit youngish? Again the alcohol is not entirely integrated, yes this is youngish, although the creamy qualities are quite nice, as are the pineapple and coconut notes. Herbal notes towards the…

In general I like pot still distillation when it comes to Irish whiskey, so I can see lots of qualities. Nonetheless the alcohol (and possibly the age) take part of my enthusiasm away. Big price differences, from € 80 to around € 140.