This Laphroaig 1998 is another new exclusive for The Whisky Exchange, bottled by Signatory Vintage. Again it is not a completely undiscovered series, adjacent sherry butts have been bottled for La Maison du Whisky and others. 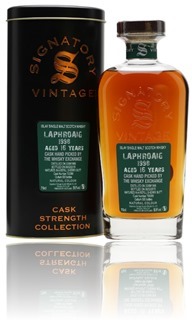 Nose: a very sooty kind of Laphroaig. Lots of earthy smoke and leafy notes, wet limestone and leather. Exhaust fumes and hints of matches. There’s a dark sweetness to it as well, with lacquered roast meat and beef jerky as well as something of prune sauce. Peppery chocolate and subtle medicinal notes. A very dark style.

Mouth: really dark smoke again, with tarry notes and mineral notes. The charred raisins on the outside of a raisin roll. Liquorice and Pu’ehr tea, with some cough candy. Espresso. A nice mintiness (After Eight) and sweet tobacco lift it up a little.

Finish: long, still very smoky and leathery, with some salted almonds and cinnamon.

An interesting, dense and dark Laphroaig. The spirit overpowers the sherry in this case, but that is obviously not so bad. As you know sherried Laphroaig doesn’t come cheap these days: around € 170. Available from TWE.