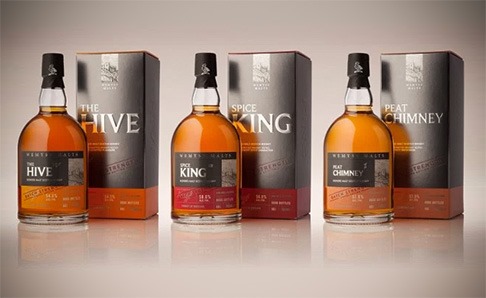 Wemyss Malts – Batch Strength is a new series of cask strength versions of the existing The Hive, Spice King and Peat Chimney, three blended malts that have been around for quite a while now.

The Batch Strength releases have been selected and blended with casks of single malt whiskies from over 10 Scottish distilleries.

They seem to have dropped the 8 Year / 12 Year age statements that were on the previous lower-strength bottlings. All of them will be available soon for around € 50-55.

The Hive is composed around fruity and sweet Speyside whisky.

Nose: thick honey, toffee and orange candy. Some cider apples and plum syrup. Hints of overripe melon. Bakery aromas. Almonds. Honeycomb. A little hay and grass. Maybe not the bright nose I was expecting, but it does in fact have a big beehivey side.

Not bad, sweet and honeyed indeed but it feels a little heavyweight and liquorous to me: limited complexity doesn’t pair too well with high strength in my opinion.

Nose: richer, with spices up front. Black pepper, cinnamon and nutmeg. It has a leathery, earthy quality with faint smoke. Talisker-style. Behind this is a darker, more sherried fruity layer. Orange zest. Burnt sugar. Hints of tobacco.

Mouth: good, although seemingly young. A big pepper & salt combination, with more peat than the nose suggested. Some cinnamon and ginger, brown sugar and an oaky note. Liquorice. Something of a young Ledaig too.

Finish: rather short, with a light, ashy aftertaste and a briney hint.

I really liked the nose of this Spice King, but it felt much simpler on the palate. It kept reminding me of its youth, something I didn’t have in The Hive. Still I like this profile better.

Mouth: raw, citrusy peat. Youngish. Lemon zest and lots of sweet chilli notes. Plain peated barley too. Sooty notes behind it, as well as a hint of vanilla and pear. Liquorice.

The most intense of the series, probably the best as well. It feels right, the youthful character doesn’t bother me and the price helps to make this a nice expression.