As you know I find comparing similar casks only interesting if there is at least a certain deviation. In this case we have slightly different ages and profiles: mainly bourbon casks but also one sherry butt. I tried them in the order below, but I took a pause before tackling the sherry cask (which was lower in alcohol). They’re all between 17 and 20 years old. Interestingly there’s also a deviation in pricing, from € 90 to around € 140.

Nose: sweet pears and nice apricots at first, followed by grassy notes. Tinned pineapple in the background. Also oily, greasy touches. Hints of wet gravel. Gets slightly milky after a while, with hints of peach yoghurt. Even something slightly rubbery / sooty.

Mouth: a bit austere. Resinous notes, as well as apples, ginger and mustard. Zesty citrus, perhaps some apples. A big peppery side as well, as if we’re trying something with even more alcohol. Hints of sawdust. Earthy notes underneath. A bit harsh.

Finish: long, grassy, with some green touches and zesty lemons.

A quirky profile, not for beginners (like me!). I thought the nose was really interesting, but the palate is too austere for me. Around € 130, still a few bottles available.

Nose: even more on waxy / greasy notes than the Liquid Treasures bottling. I often get lipstick notes in 1960s Ben Nevis and it’s also present here. Rather dry, with hints of chalk. Gets a tad more fruity after a while, on (dried) apple and lime. A few jelly babies. Then back to linseed oil and porridge.

Mouth: this one has a nice fruity backbone, with peaches and melons, as well as some tropical touches of Irish whiskey, alongside its greasy side. Much rounder, almost creamy, although there’s still a chalky edge and a hint of ginger.

Finish: rather long, good balance of fruits and minerals.

Based on the nose, I thought we would end up in the lower 80’s again, but the fruitiness on the palate made it end considerably higher. Around € 135, still available in some places.

Nose: the most candied of the trio. More pineapple this time, hints of aromatic mirabelles and white grapes, though always a bit ‘capped’ by the mineral, chalkier notes. Linseed oil. Hints of pollen. Soft minty touches. They all have the same notes but the balance makes all the difference.

Mouth: immediately the same flashes of Irish überfruits, which is nice. White peaches, apples, sweet lemons, sweet grapefruits and just a hint of honey. A few floral / fragrant notes too. Just a tad more alcoholic than the Sansibar bottling.

Finish: medium long, with some grassy notes and a lemon & salt combo.

Good whisky again, almost like an endless battle between fruits and minerals. Great fruits and above-par complexity. Good job selecting this as a club bottling. Around € 115. 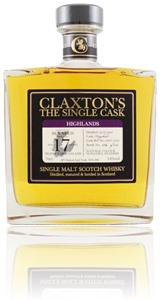 Nose: a tad more oak up front, and more common aromas like toffee. Then dried grasses and ripe fruits in the background, but relatively vague and less aromatic than the two previous expressions. Less intriguing as well.

Mouth: a tad hot with an oaky tang. Barley sugar and sweet apple juice, tinned peaches and sweet lemons. Hints of violet candy. Certainly less mineral than the others. Less complex too.

Finish: fairly long, peppery, with citrus and a herbal touch.

This one is a lot easier, but also less characterful. Depends on your preferences. In any case the pricing is attractive: around € 90.

Nose: black cherry fruitiness, some walnuts and perhaps a light hint of cocoa. Hints of pastry. Light matchstick notes behind this, darker chalk, a hint of parsley. Kind of a more savoury version of the others. Rounder notes (smoked peaches) after a while.

Mouth: interesting mix of blackcurrants, sweet walnuts, sour berries and dark chocolate. Pepper. Not particularly fruity but not very mineral either this time. Hints of matchsticks. Leather and light herbal notes. More zesty notes after a while.

Another highly individual whisky, this time in a more sherried version (though by no means a sherry bomb). This surely was a very interesting session. No masterpieces but most of them quite unique. Around € 125.