Laddie Ten is the unpeated cornerstone of the Bruichladdich range. It is composed with first-fill Bourbon, sherry and French wine casks and bottled at 50% alcohol.

Bruichladdich Laddie Ten was released for the first time after the resurrection of the distillery in 2011. Now this is replaced by the second edition, made with spirit distilled in 2006. 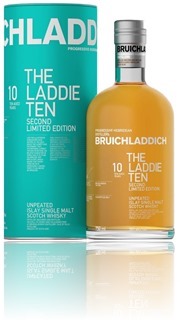 Nose: vanilla and honey at first, but there’s also a farmy / leathery / tobacco note that reminds me of old Brora. Wet wool. Then back to fruity notes, lemons and a nice hint of tinned pineapple. Some marine notes. A little milk chocolate in the background.

Mouth: creamy, sweet, citrusy, with a good dose of oak spices and honey. Butterscotch. Later also pepper and that milk chocolate from the nose. Nonetheless this is still fairly neutral and malty. Creamy malt and good oak really, the rest is secondary. Light grassy / tannic notes towards the end, balanced by some golden raisins and red apple. Light coastal notes and gingerbread.

Great freshness on the nose, with a nice farmy touch. More middle-of-the-road on the palate though. Really solid as an entry-level dram. Around € 65.