Dewar’s 25 Year Old is a new premium blend that will replace Dewar’s Signature in travel retail. They are replacing a NAS expression with an age statement, that’s nice to hear.

Composed by Dewar’s master blender Stephanie MacLeod, this has been finished in freshly disgorged casks that previously held Royal Brackla single malt (which is also part of this blend). A single malt finish? Not sure there’s proof for the claim that this adds extra smoothness (or anything else). 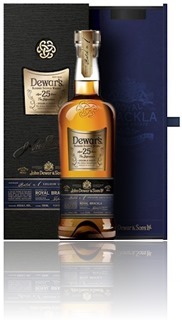 Mouth: a bit light and thin, although this could also be named smooth indeed. Some toffee notes, orange sweetness, vanilla and honey. There’s a slight grainy edge but overall none of the roughness that you sometimes find in blends. Evolves towards cinnamon and ginger. The lightest whiff of smoke.

A good blend actually. I especially like the aromatic nose, whereas the palate could have used a bit more oomph. After a travel retail period it would also be rolled out to certain domestic markets.