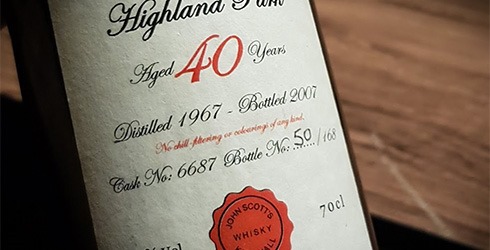 John Scott’s (later Johnn Scott & Miller) was a grocery store in Kirkwall, Orkney which also delivered handyman services to the Highland Park distillery. They also had a tradition to do shop bottlings for their neighbours.

In 1967 the owner Robert Firth Miller was paid for one of his jobs with twelve sherry casks (some sources say quarter casks) filled with new make spirit. They were passed on to his son Robert M Miller and between 2003 and 2009 all casks were bottled by Duncan Taylor, some mentioning John Scott’s on the label, others simply under the Duncan Taylor brand.

I must admit I hadn’t heard of these bottles until this 40 years old cask #6687 was opened by our friend Karel, as the highlight of the rather magnificent line-up in his 40th birthday tasting, opening nearly a dozen bottles, each 40 years or more!

Absolutely delicious, very intense which brings along some dryness on the palate. Just glorious old-style sherry: fruity, complex stuff. They fetch almost € 2000 in auctions now. Respect to Karel for opening such a bottle on his birthday tasting. Cheers, mate!