I’ve tried a handful of bottlings from The English Whisky Company but none of them really managed to impress. But let’s not be influenced by previous tastings, distilleries do evolve.

This 6 year-old expression was bottled from a rum cask by Claxton’s Spirits. 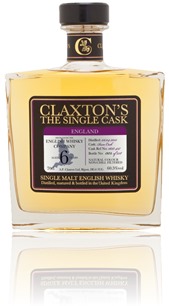 Nose: nice and sweet, with lots of confectionary notes, cotton candy and indeed a hint of white rum. Pineapple cubes and honey. A little mint as well. So far so good, really, except maybe for the potpourri note in the background.

I think the rum played a big role here, adding lots of candy sweetness to a faultless but limited spirit. The nicest nose I’ve had from St. Georges distillery. Around € 65 from Master of Malt.