Connemara is the peated Irish whisky by Cooley Distillers. With their Connemara sherry finish, they introduced a Small Batch Collection of limited releases.

Now the second edition has been presented: Connemara Turf Mór.
You already guessed this is a heavily peated version – around 58 ppm which is in the range of Ardbeg and well above Lagavulin or Laphroaig. The regular Connemara contains around 20 ppm phenols. It’s 3 years old. 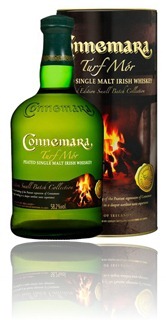 Finish: long and drying, on peat and cereal notes.

This Connemara shows heavy peat but in another way than most Islay distilleries. The added roundness and fruitiness brings a nice variation on the theme. This will be popular and it’s well deserved. Due to be in stores December 2010. Only UK, Benelux, Germany and Ireland for now. Around € 65.