Goldlys is a Belgian distiller who uses malt, rye and maize as basic ingredients and both pot stills and column stills for the distillation of its whisky. They were the first to produce whisky in Belgium, and they have the oldest stocks.

Have a look at the previously reviewed Goldlys Limousin cask. 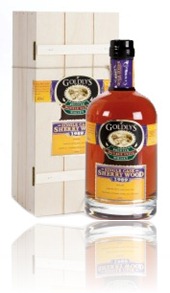 Nose: the first thing I pick up – and quite strongly so – is Nivea cream. You know, the white, fat cream that our grandmothers use to moisturize their skin. Not bad, but rather unexpected. This fades after a while and makes place for notes of rye, oak polish and dried banana. A whiff of mint. There’s a sweet, fruitier side to it from the sherry, but overall it’s not really my kind of profile.

Mouth: quite oaky and peppery with a big emphasis on the rye, so it seems. Green banana skin. Some eucalyptus and cloves. Not much sherry influence here.

This single cask Goldlys should arrive in stores as we speak, just in time for Father’s Day. If your dad likes rye whiskey (or some bourbons like Woodford Reserve), this could be an interesting gift with a nice wooden box. If he’s into single malts, then you’re taking quite a risk. Around € 30.