We’ve safely returned from a wonderful day of BenRiach 1976 goodness.

As an aperitif, we had the BenRiach 1985 Liquid Sun, one of the first bottlings with this label (still a minimalistic white label at that time). I knocked over most of my glass, but I had already tried it at Mara’s whisky cellar one day and knew it’s a deeply malty, fruity, naked BenRiach.

The other aperitif was the BenRiach 1995 cask #5968 for South Africa. That one’s port finished and not really my kinda dram: raspberry and rosehip syrup on the nose (as well as some musty cellars) and winey blood oranges with big oak on the palate. Too much wine. 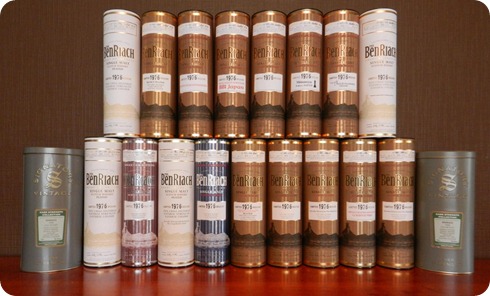 The actual tasting line-up was broken down into four flights of drams. Originally they were put together based on cask numbers, but a few last-minute changes were made based on the fame some casks had already gained from certain reviewers and maniacs.

Our host Serge Reijnders explained he had been collecting these bottles since 2006. Especially the Asian versions were hard to get, as some of them spent weeks in customs and only came out after several e-mails and telephone calls. Not to mention the shipping costs to get them directly from Shinanoya or “his Japanese guy” as he puts it. During the tasting, Jürgen Vromans showed a few nice videos with highlights of the year 1976.

Traditionally the expressions bottled for La Maison du Whisky and The Whisky Fair are seen as the best of the 1976s. Of course they gained this status before the Asian casks were released, so we were eager to find out whether they still deserve the crown.

Unsurprisingly, this was a rather low-level flight. Although you could already find some elements of the true 1976 profile, none of these casks made a very good impression right away, and even after half an hour of breathing some of them failed to show a balanced profile.

Cask #4469 was much better than the previous port version and shows both dried fruits, fresh tropical fruits and soft peat. A nice 3-in-1, but pretty dry in the end. Cask #9441 was closed and slightly alcoholic and very citrusy / minty. Fresh but not very expressive nor very typically 1976. Cask #8084 had a bit more polished oak and therefore failed to show much fruits. The soft peat and its balance were really nice though. A simple dram maybe, but enjoyable. The group picked it as their winner. Cask #9442 had a nice nose with old polished oak, subtle sherry. It had a nice burst of pink grapefruit on the palate but turned towards oak spices a bit too much. Cask #8081 was the winner of the pack for me.  It has sweet fruits and light camphor on the nose but certainly on the palate it showed typical tropical fruits, lovely pink grapefruit and very soft peat.

Flight 2: A bit of everything

This flight contained the first official 1976  single cask ever to be bottled, cask #8079 for Craigellachie hotel. I reviewed that one before but I’m now obliged to add an extra point, it’s better than I thought it was. I also really liked cask #2014, which was very expressive but slightly “greener” than most 1976s. More complex as well, more like some 1975s in fact. One of the first highlights of the evening and our favourite of this flight. Cask #6942 stood out as well; it’s much more sherry-influenced so less typical, but man, that’s deeply fruity, luscious sherry! Cask #8795 was the only letdown, with considerably less fruits, more dry oak, and less evolution. Cask #8080 for The Nectar is the best choice if you want to try one of the (subtly) peated 1976s but overall I had higher expectations for it.

As a nice surprise, Serge had also arranged a cask sample drawn from cask #2013 a couple of days ago. It’s one of 16 casks of BenRiach 1976 that are still waiting in the distillery warehouses (six of which are marked good enough for single cask bottling). It’s definitely nice, but it failed to match its sister cask #2014 in terms of fruitiness and complexity.

Some of the latest 1976 releases were bottled for Asian distributors and although we can rarely try them in Europe, there were some rumours about high quality.

This was a big step up from the first flights. Each of these was higher quality than (almost) all of the previous bottles. Only for cask #3010 for Auld Alliance it was not the case in my opinion. It had the typical 1976 qualities but in a shy way, and the oak was quite loud. Cask #3551 for LMdW stood out as a nice, more vanilla / frangipane version, with a tad more polished oak. Cask #3041 for BBI Japan had a great, typical nose (with slightly overripe fruits) but was quite soft on the palate. Cask #3550 for The Whisky Fair was excellent, very fresh, with a nice citrusy acidity first and then a tropical warmth. Cask #3029 for Shinanoya was even better, with probably the best nose of all 1976s. Very direct and expressive. Even though it’s not the most complex version, and the palate is less punchy, it’s my number 2 in the overall ranking.

Flight 4: Best of the best from Germany, France and Asia

Note that this flight was poured as blind samples. Especially cask #3557 has quite a reputation (nicknamed “The One” by some people) and Serge wanted to avoid any preoccupations.

By now we had lost our hopes to identify a clear winner. This must have been the most difficult tasting ever, as the differences between these casks come down to subtle nuances at best. I will happily take a bottle of each of these four, they’re all exceptional whiskies. 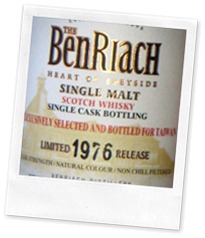 Initially cask #3557 for LMdW stood out. On the nose it shows some exquisite, silky, polished oak and notes of eucalyptus and mint that’s not present in any of the other casks (at least not in the same way). But as soon as you taste it, the oak is too loud in comparison to the other casks. Cask #3033 for Taiwan on the other hand had a great, creamy nose with lovely strawberry notes (I’m only naming the more uncommon notes here). On the palate it’s the most complex whisky in the line-up: lots of citrus and tropical fruits of course, but also toffee sweetness, mocha, soft herbs, you name it. Cask #3558 and cask #3032 are both excellent but they’re just one step behind. Again, really nit-picking here.

In conclusion, cask #3033 for Taiwan was named the best BenRiach 1976 ever by our group of +/- 30 experienced whisky enthusiasts. Cask #3029 for Shinanoya was in second place, with a lot of votes and a special mention for its immaculate nose. The group chose cask #3032 in third place, but I’m still leaning towards #3557.

Surprisingly, nobody picked The One for La Maison du Whisky as their favourite expression. It is indeed a great dram, but it has been surpassed by some of the Asian releases. Or as someone put it: The One is now The Two.

Many thanks to Serge for his dedication in bringing the complete series of BenRiach 1976 single casks together and sharing them with us! A unique tasting that’s unlikely to be reproduced in the future.