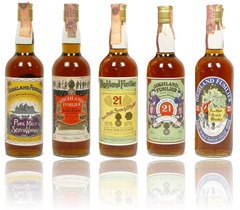 For the Tercentenary anniversary of the Scots Regiment of Foot (1678 – 1978), Gordon & MacPhail released a 21 years old vatted malt (“Pure malt”). Although there is no mention of the distilleries involved, the vatting probably includes some 1950’s Macallan.

Surprisingly they are seen with at least five different labels (click to magnify). Many of them found their way to Italy through Sestante and Pinerolo. I’m not sure whether all versions contain the same vatting. They seem to have the same colour though.

Mouth: a short sweet introduction (caramel and sultana), quickly taken over by oaky and bitter notes (herbs). Not as full as I hoped, not too complex either. Slightly past its due date maybe.

Finish: not too long, hesitating between caramel sweetness and herbal oakiness.

One of these old drams with a great nose (91-92 points) and a palate that’s slightly less impressive. That being said, it’s a lovely example of the 1950’s sherry style. Around € 150 in auctions.