Springbank 21 years old is an iconic whisky (read this if you don’t know what I’m talking about). Several batches were bottled in the 1980’s and 1990’s but since 2005 the reserves had dried up. As the distillery was closed from 1979 until 1989, it was clear that it wouldn’t come back before 2011. And here it is… matured in fresh and refill sherry casks and presented in a 1980’s gay golden packaging. 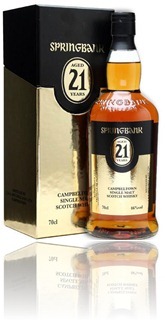 Nose: well, very good. Rich sherry notes: juicy plums and rhubarb jam. Hints of heather honey and roasted sugar. Not exactly sweet though, there are plenty of spices (ginger, pepper) as well as some wood tones and a certain musty cellar theme to keep it on the dry side. The modern Springbank austerity (minerals, brine, wax) is also showing. Quite complex.

A very complex dram, probably the best modern Springbank. I have to admit I was quite skeptical but in the end it did win me over. It takes the old profile and blends it with the new distillery character. A worthy successor if not for the winey side (but that’s also a modern feature I guess).

Originally around € 250. Already gone now and the last remaining bottles are fetching € 500. Would I trade one of the old ones against this new version? Don’t push it. No.