Not a new story, but still a nice one for the weekend. Interesting video too. 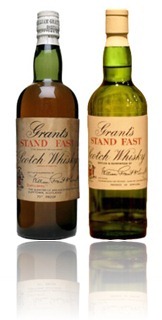 In 1898 William Grant, who built Glenfiddich distillery a decade before, took over Pattison’s, the largest whisky blender at that time. He created the Grant’s blended whisky which is nowadays the fourth largest brand of blended Scotch. You can tell it’s related to Glenfiddich as they share the typical triangular bottle, introduced in 1957.

Earlier this year Paul Kendall, archivist of the Grant’s family, discovered a book which contained the recipe of Grant’s Stand Fast, written down on 11th of June 1912. To celebrate this 100 years old recipe, current Master Blender Brian Kinsman re-created it and bottled 100 bottles.

The original recipe contained 6-7yo Glenfiddich, 6-15yo Balvenie, one cask of 9yo Highland Park and a couple of casks from different grain distilleries like Cambus, North British and Port Dundas.

By the way, all 100 bottles will be archived, none of them will be sold. Instead I’ll try the standard Grant’s blend in the near future. It never hurts to keep things in perspective and try some of the basic stuff.