The guys from De Tongerse Whiskyvrienden, a whisky club in the Eastern part of Belgium, hunted down this cask of Laphroaig 1997 in the stocks of Signatory Vintage. The remaining part of the sherry hogshead went to Vinothek Massen in Luxemburg. 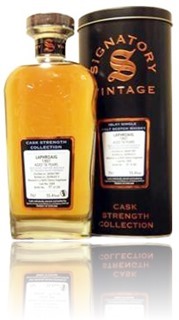 Nose: the higher sweetness points to sherry, but other than that, it’s not a sherry bomb like some 1989’s or 1991’s for example. Obvious peat, some red apples and walnuts. Classic Laphroaig medicinal notes. Olive juice and seaweed. Grows more coastal over time. Maybe some plums in the back.

Mouth: thick, again fairly sweet. Enters on coffee, mocha, praline, these kind of flavours, before it turns the heat up. Pepper and liquorice. Tingling ginger as well. More peat and earthy elements than on the nose. Some menthol in the aftertaste.

Finish: medium long, losing some of its sweetness and going back towards olive juice, liquorice and lemon zest.

This is just a refill sherry, so what you get is still pretty classic Laphroaig with an added sweetness. Good like most Laphroaig. Around € 100.