Massandra is the oldest winery in Crimea. It has been producing fine wines for more than 110 years and won international acclaim for its quality. The winery tends to mimic some of the greatest styles like Port, Tokay or Madeira. Moreover, they own one the largest collections of rare wines (over 1 million bottles), some of which were once in the collection of the Russian Tsars.

Back in 2012, Glenglassaugh released five old expressions, all finished in ex-wine casks from Massandra. One of them was a 33 year-old 1978 vintage finished in a “Madeira style” cask.

For a recent tasting organized by the Belgian shop TastToe, Douglas Cook brought a cask sample of another Madeira finished 1978 vintage, now 35 years old. This ‘sample’ was presented in the new single cask bottle, with a printed label and everything. It was taken directly from the bottling line and it should hit the market in the near future. I’m not sure whether this was the same cask that was reused after 2012. 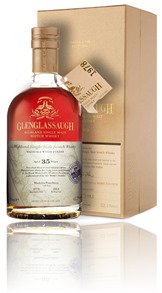 Finish: long, medium sweet, quite rounded with jammy notes (plum), herbs and a touch of smoke.

Really nice whisky, with a wine influence that’s close to regular sherry, but with a few twists. Not overdone – good. Something to look out for, although probably € 350 – 400 when released.