This Springbank 12 Years Old is nicknamed Green. It is made from naturally farmed barley, but as the distillery itself doesn’t have the right certificates, the resulting whisky can’t officially be called organic. Hence green.

It’s matured entirely in bourbon casks. Springbank is preparing a 13 yo Green for next year, matured in sherry casks. 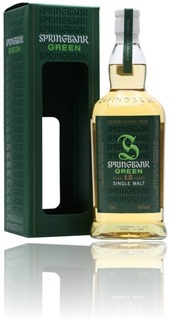 Mouth: starts bright and citrusy, then some creamy barley and vanilla biscuits. Honey. Becomes oilier and ashier. On to some grapefruit zest, walnuts and youngish cereal notes. Hints of peat as well as pepper. Just a slight bitter tang.

Finish: medium long, with grainy notes, a lemon and salt combo and liquorice.

I haven’t been a huge fan of recent entry-level Springbanks, but I liked this one almost immediately. I’ve tried it a few times already and it’s a nice treat. Around € 70 – in stores now.