You know the story: Tun 1401 was a hugely successful series for The Balvenie, so they moved to a bigger marrying tun 1509 in 2014. Each batch is now four times bigger than the batches of 1401.

This second batch consists of 32 casks (23 American oak hogsheads and barrels + 7 European oak sherry butts + 2 sherry hogsheads) selected by David Stewart. It was launched at the end of the summer. The bottle comes with a geeky list of cask numbers and aromatic profiles. No mentions of the age though. 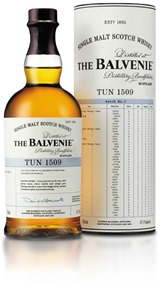 Finish: long, with some woody notes, cinnamon and mint.

From the taste it seems clear that Balvenie is using less aged casks than they did for Tun 1401. I’m missing a bit of sherry, and simply the higher quality components of Tun 1401. Around € 350.