Balvenie Tun 1509 is the follow-up of the distillery’s success story Balvenie Tun 1401 which was released in nine batches between 2010 and early 2014. All of them were good whiskies, some of them even outstanding.

So now there’s this new 8000-liter marriage tun #1509 which is four times bigger than its predecessor. For Balvenie this is a way of upping the scale and reaching more people. Nothing wrong with that.

However not only did the scale change, the cask distribution is also clearly different. Tun 1509 batch 1 consists of 42 casks: 35 ex-bourbon casks and 7 sherry butts (all nicely listed on the label). Taking into account the different sizes of these casks, it means around 30-35% sherry matured whisky, whereas this was around 50-70% in the Tun 1401 releases. Wait a minute: slightly younger whisky, less sherry influence, larger scale and yet a considerably higher price… 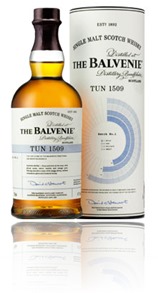 Mouth: orange peel at first, then nutmeg and a clear oaky side. Warming cedar oak and tobacco leaves. Soft pepper, ginger and clove. Just enough grapefruit to make it brighter again, but on the whole it feels a little thin and (bourbonny) oaky.

Finish: long, with a subtle bitterness of rhubarb and orange peel. Still some wood spices and waxy notes.

Really good whisky again, but it doesn’t fill the footsteps of its predecessor entirely. Whereas the old Tun 1401 batches always had these round sherry elements to balance the oak, the bourbonny side of Tun 1509 simply places more focus on the wood. Around € 300.