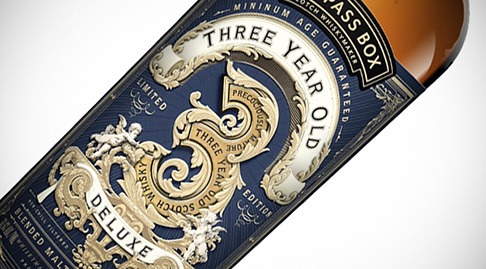 In times when distilleries are hiding the age of their whiskies because they fear consumers would think the price is not justified, artisan whisky creator Compass Box adds a couple of litres of 3 years old whisky to an otherwise old blended malt. They prominently name it 3 Year Old Deluxe and thus probably create the most expensive 3 year-old in the history of Scotch whisky.

Is that a middle finger or what? And beautiful PR as well. It’s sad that some people were appalled by the price and didn’t get the joke…

Nose: immediately waxy and recognizable. It shows big notes of orange blossom honey and sweet baked apples and ripe yellow plums. There is a very light hint of peat in the background, which brings it close to some of the latest Brora expressions (which were closer to Clynelish sometimes, if you know what I mean). Just a hint of creamy vanilla and cinnamon pastry. Deluxe indeed.

Mouth: good mix of dry and fruity notes. Orchard fruits again (apples, greengages) but also light tropical touches (grapefruit, tangerine), balanced by some mineral notes and a dry grassiness. Pepper and clove, just a hint of vanilla and fresh oak shavings, perhaps a tad younger than expected? Not exactly peaty, but there’s an ashy side to it.

Finish: more bitterness of the grapefruit and waxy lemons now, rather zesty with the riper fruits and oak spices in the very end.

Beautifully composed again. I really love the idea of combining middle-aged Clynelish with Talisker and recreate Brora from its final years, in a way. Around € 240.