I already tried mezcal some twenty years ago, but I have to admit I only knew it as that bottle with the worm inside – a Mexican gimmick and just cheap alcohol. Fast forward to 2004, when I tried the first decent Tequilas and Mezcals, as well as the mildly alcoholic Aztec precursor pulque during my holidays in Mexico. Still, there wasn’t much of an artisan mezcal scene back then.

The last couple of months, I thought it was time to dive a little further into this drink – people kept telling me it was an interesting malternative. I’ll give you some basics first and then review a couple of mezcals that I’ve recently discovered.

The word mezcal comes from the Nahuatl words metl and ixcalli, which taken together mean “oven cooked agave”. There you have it: mezcal is made from Agave, a type of cactus, also called Maguey in Mexico. More than 200 varieties of agave exist, but a limited amount is suitable for the production of alcohol.

For mezcal Espadín is by far the most common type of agave (90%) as it is easily cultivated. Most other types are foraged in the wild, so difficult to control. Some of the names you’ll find are Tobalá, Madrecuixe, Cirial, Tepeztate, Cupreata, Arroqueño… There are ‘single variety’ mezcals but also blends.

Maguey plants take 8 to 10 years to mature. As soon as they start to flower, they can be harvested. Only the heart of the plant (which looks like a giant pineapple) is used, not the leaves.

They are then baked in a conical baking pit dug into the ground and left alone for up to a week. It caramelizes the sugars and imparts a certain smoky character. You could say standard mezcal is similar to peated whisky, but some mezcals are specifically produced to minimize the smoky side.

After being baked, the hearts are crushed (often with stone grinding wheels) and a mix of pulp and water is placed into fermenting tanks for another week or so. The fermented pulp is distilled twice, sometimes in very primitive stills and sometimes for as long as 24 hours per distillation. Triple-distilled examples also exist. 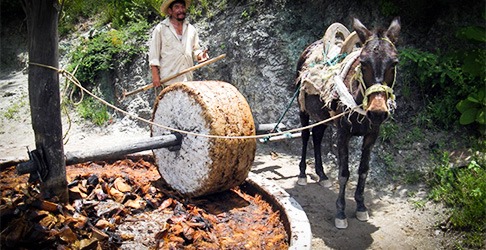 The best mezcals are 100% agave but it can be ‘mixto’ as well. It will always have 80% or more agave though (unlike tequila).

Commercial production of mezcal is relatively recent – most artisan producers started distilling for private use. In general mezcal is a much more artisan drink than tequila, simply because it hasn’t been picked up by the masses, I guess. Most of the true malternatives are quite traditional, not to say primitive in their production methods.

The beautiful Oaxaca state contains more than 90% of all mezcal producers and was the first to obtain a D.O. status (Denominación de Orígen) in 1994. Since then, 7 other states also have a D.O.

There are different categories of mezcal, based on its age:

I can tell you’re thirsty by now…

Like many producers, Siete Misterios has a range of mezcals from different species of maguey. This is made with the most common type.

Nose: not unlike whisky, if you think away the oak influence. Fruity notes (banana, berries) and toffee, with a sourish note that is quite typical for Espadín I am told. Delicate smoke and pickled cucumber. Herbal and earthy touches as well.

Finish: quite long, warm and spicy.

The perfect introduction to mezcal when you have a whisky background. But I prefer the more unique – smokier style of the other two.

Made with Espadín. Double distilled in copper pot stills, rested for three months in glass, from Villa Sola de Vega. Around € 50.

Nose: totally different already. There’s an industrial / garage-like smell to it that is weird and lovely at the same time. Think motor oils, new plastics and paint thinner. Moving towards pine needles and flowery aromas. Nice red candy notes in the background. Intruiging.

Mouth: the smoky style lives on. Rougher than the Siete Misterios, spicier as well. Vague sweetness in the background. Some meaty notes and hints of salty liquorice. Bright citrusy top notes too.

The most complex of this trio, with a nice combination of different aromas. My favourite.

Marca Negra (black mark) was founded around 2011. They have a range of different species of agave.

Nose: a similar style of smokiness / industrial edge, the smokiest of the three. Even some farmy touches (Octomore-ish). This time with a more gin-like base. Hints of juniper and fresh herbs, lemon peel and mint. Brown banana. Over time I get some coastal touches as well.

Mouth: drier than the others, with more herbal notes and a firm smoky, not to say tarry body. Hints of lime and salt. Not the most complex, but the balance of pungency, sweetness and smokiness is very good.

Finish: not too long, on tobacco and pepper.

Also very good. If you prefer Islay whiskies, then this should be on your list.

After these three young Espadín expressions, I’ll give you some more unique mezcals in the second part of this story.