Things are going fast. This is post n°400, and a very special one.

It’s safe to say this single cask Karuizawa 1967/2009 is the most legendary Japanese whisky to date (the oldest as well by the way). It was bottled in August 2009 and the cask was split between La Maison du Whisky and The Whisky Exchange (a total of around 450 bottles).

It wasn’t cheap (retail price around € 240-280) but it already fetches three times as much in auctions. An excellent investment, that is. 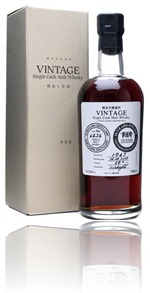 Nose: like walking into a high-end cigar store. Magnificent notes of pipe tobacco and cigars. Lots of polished oak, a few hints of solvents even. Amontillado sherry. Menthol. Musty earth. Fermented Pu-erh tea. Leather. It needs a bit of breathing, but it’s superbly complex, with an amazingly fresh side as well (whiffs of raspberry jam, strawberries and plums). Also a soft vanilla coating that I didn’t expect in a heavy sherry bottling. None of the matchsticks of the 1976/1977 releases though. Anyway you can really get lost in such a nose.

No need for an elaborate conclusion… My favourite release of last year. Dark sherry maturation doesn’t get much better than this (unless you add some peat maybe?).

ps/ There have been rumours about an even older Karuizawa… I can’t wait.