Noh, or Nogaku, is a form of classical Japanese musical theatre with a history dating back to the 14th century. It is played by men. Many of them are masked as they also play female roles. By having a series of whisky with this name, No.1 Drinks (the European distributor of Karuizawa, Hanyu and Chichibu) pays tribute to this form of art, full of respect for Japanese tradition. 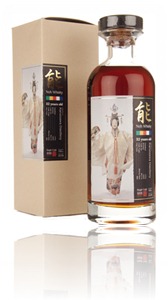 Nose: big sherry, yet less explosive than some previous Karuizawa. Very nutty with big hints of new leather, together with juicy tangerine and honey. Lots of fresh matchsticks (a common thread in 1970’s Karuizawa). Some figs. Ginger. Lovely raspberry jam. Water brings out hints of cigar cases and delicate smoke. So nice!

Mouth: hot hot hot, but I pick up some oak, very dark chocolate and liquorice. Let’s add water. Cherry liqueur. Again quite nutty. A pinch of pepper. Gets slightly medicinal in the end, which is a great addition to the Karuizawa profile.

If anyone doubts the quality of Japanese sherried whisky, try this! Very big and flawless. Perhaps too wild and powerful to be hugely complex, but still a benchmark for heavily sherried whisky. More refined than Wait La Mazurka, with more delicate gunpowder notes and a better balance with the sherry. Around € 165 but sold out in the major shops.