For the latest edition of Whisky Live in Japan, four casks of Japanese whisky were selected as festival bottlings. This 19 years old Karuizawa (cask #6446) was one of them. After the festival, it showed up in different shops. 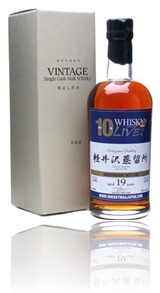 Nose: starts quite fresh and aromatic but also more winey than older vintages. A few bourbonny notes with vanilla and almonds. Orange liqueur. Mint and cinnamon. Water brings out apples with cinnamon and oak shavings, plus a few flowery notes (geranium). Very good – much less extreme than most older, legendary Karuizawa.

Finish: long, slightly oaky. Still based around the spices.

This Karuizawa has less explosive sherry influence than we’re used to – its style reminds me of the Karuizawa 1988 cask #3397. It’s firm and enjoyable, but less complex. For me one of the lesser bottles from this distillery but that’s nothing to be ashamed of, it’s still very good.