Teeling Whiskey Co. is headed by Jack Teeling, the former Master Distiller of Cooley distillery. However the family’s whiskey heritage dates back to distilling in Dublin in 1782.

Beginning of 2013 they launched a new small batch Teeling Whiskey and they are currently exploring the opportunity to open their own distillery in Dublin [Update 21/08/2013: they’ve just bought Dundalk brewery from Diageo]. Just to be clear though, for now the company has supply contracts with Cooley for new make and aged spirit, but is also sourcing specific casks from other suppliers.

Their latest release is a 21 year-old distilled in 1991, named Silver Reserve. Triple distilled and initially matured in bourbon barrels, the Silver Reserve was finished in sauternes wine casks. It comes from an undisclosed supplier (but if we are allowed to make an educated guess, we would say Bushmills).

The Silver Reserve is part of a larger Vintage Reserve series and will be followed by a Gold Reserve 26 years and a Platinum Reserve 30 years old in the coming months. For now it is only available in Ireland but it will soon be rolled out to Western Europe, New Zealand and Canada.

Update: a well deserved Thumbs Up Malt Maniacs Award 2013 for this one! 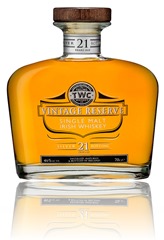 Nose: a very rich fruitiness, with lots of Charentais melon, litchi, white grapes, papaya and raspberries. Maybe old roses. Also, if you like the BenRiach 1976 kind of sweet pink grapefruit aroma, this shows it twice as strong. Hints of frangipane. But it’s not all sweetness, it is balanced with grassy / earthy notes and soft spices (pepper and mint). There’s nice beeswax as well.

Finish: medium long, with a lingering jammy fruitiness and some drying elements.

A very nice offering: it shares the slightly exotic fruitiness with other Irish whiskey, but it’s more complex and spicy. Around € 150.