Ledaig 42 Year Old is the rarest and oldest expression of Ledaig to date. The 1972 vintage malt is named Dùsgadh, meaning ‘awakening’ in Gaelic.

Ledaig distillery on the Isle of Mull was mothballed in 1930 due to lowering demands. It was reopened in 1972 and new stills were installed. The happy times didn’t last – after 1975 there were several problems and production never really took off. Burn Stewart (of Deanston) bought the distillery in 1991. The official name is now Tobermory. 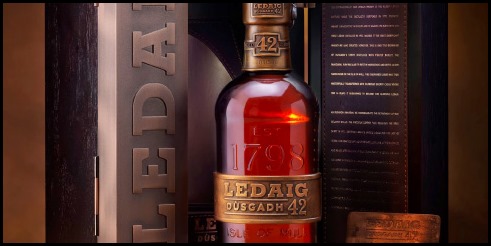 This Ledaig 42 Year Old is made from inaugural spirits produced in the 1972 stills, which have been retired in 2014. Some of the aged copper has been used in the packaging, and the copper card that is included entitles you to a bottle of Ledaig Déanta, the last distillate of the retired stills, in ten years’ time.

The whisky was aged in several hogsheads and butts until master distiller Ian Macmillan transferred the liquid into González Byass oloroso sherry casks in 2001 to add a further layer of flavour. Only 500 bottles are produced.

Mouth: much more smoky and sooty now, surprising for such an old whisky which usually looses a lot of these aromas. Cigars and hints of tar. Red fruit jams, hints of Ginjinha. Cinnamon cookies. Honey. Candied ginger. Leather and oak polish. Toffee with black pepper and some nice dark chocolate. Big and very balanced.

Ledaig 42 Year Old is definitely a rare, old-fashioned treat. This profile of sherry and peat, at this age, is almost impossible to find. Impressive whisky, thanks for sharing, Jack. Around € 3400.