The Whisky Exchange has just released a set of four TWE Exclusives, all sourced from the Signatory Vintage warehouses.

One of them is this Blair Athol 1988. Signatory has a long relationship with this nearby distillery and they’ve released a couple of sister casks already. 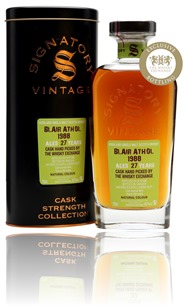 Finish: long, rather grassy, with oranges and herbal tea.

A very entertaining and slightly old-school whisky. Great nose and a densely sherried, herbal palate, which gets rounder with a few drops of water. Around € 145, exclusive to TWE.