Bruichladdich Islay Barley was originally a small batch limited edition, released for the first time in 2013, but our bottle was filled in 2015 so it has more or less become a regular expression. The grain was harvested in 2006, the whisky distilled in 2007 and matured in ex-bourbon American oak.

The Islay Barley is made solely from barley grown on the Rockside Farm on Islay. Bruichladdich has always been working with the idea of terroir in whisky and this is a good example. They source barley from 10 local farms on Islay and also from a few others around Scotland, which are used for other releases such as the Classic Laddie Scottish Barley.

I already reviewed a predecessor of this whisky, the Bruichladdich Islay Barley 2004 that was bottled for Feis Ile 2010. 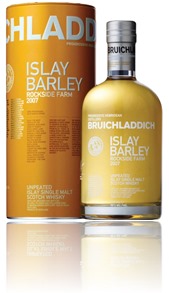 Nose: fresh, malty and creamier than the Scottish Barley, think buttered toast. Maybe a hint of popcorn. Also apples, lemon and honey. Behind this there is some hay and a vegetal / earthy note. Soft heather as well.

Finish: not too long, quite sweet, on vanilla and grainy notes.

First of all, I like this concept of experimenting with local grains and playing around with all kinds of parameters in the distilling process. This Islay Barley is not exceptional, and maybe a bit young, but really fine. I like it better than the Feis Ile sister. Around € 55.