Teeling Revival is a 15 year old bottling composed from rum casks filled in 1999. It was bottled as a special commemorative expression to mark the opening of the company’s Dublin distillery in June 2015, the first distillery to open in the Irish capital in 125 years. 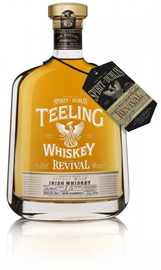 Nose: a bit sharp at first, but settles down nicely and shows the typical fruity profile. Green banana, tinned pineapple, bits of mango. Also grated coconut and some floral notes. Hints of lemon mousse. Becomes spicier as it goes along, with lots of ginger and tangy oak.

Mouth: still this slightly tropical fruitiness that is so typical for Ireland (pink grapefruit, passion fruit, pineapple). Mostly on the ‘green’ side though, with light hints of vanilla ice cream that make it warmer. Plenty of spices again, pepper and ginger, with a slightly harsh edge (think overinfused green tea). Subtle waxy notes. Finish:

Really nice and fruity, with some active oak. Easy sipping whisky, on par with Irish single casks that we’re seeing from independent bottlers these days. Around € 100.

ps/ You may want to check later editions of Teeling Revival: