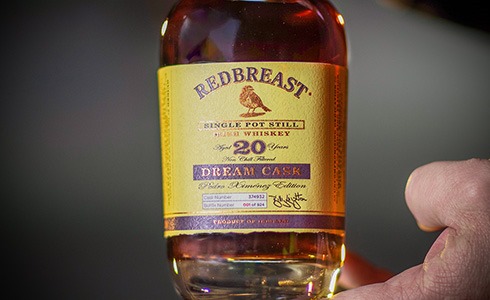 All these were originally destined for Rebreast 21 Years, but they were blended and married in a Pedro Ximénez butt, a first for Midleton distillery. It means this year’s Dream Cask was specially designed to have a slightly different profile.

Mouth: same feeling. A lot of spice and thick sherry, again with this liqueur-like feel to it. Berries, hints of coffee candy, herbal syrup and agave nectar. Becomes increasingly chocolatey. Clove, leather, hints of tobacco leaves. Cinnamon bark and a peppery bite. Also an earthy side in the end.

The raspberry liqueur and cough sweets pretty much sum it up: much more robust and simply more heavily sherried than last year’s Dream Cask, leaving less room for the naturally bright and slightly tropical Redbreast character in my opinion. A disappointment? Well, surely a good dram on its own but it suffers from the comparison.

Available for € 380 from Redbreast’s members club The Birdhouse. Tune in on Monday 27th May at 3pm local time.