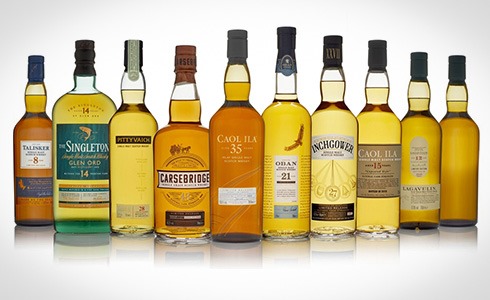 So here they are, ten new bottlings that make up the Diageo Special Releases 2018. They will be launched in limited quantities this autumn but like last year they are anticipating leaks by simply bringing the news early.

Nine out of ten special releases are now disclosed, one is kept back as a secret (last year this was Collectivum XVIII). Update: this is Cladach (gaelic for coastline), a blended malt which contains the coastal distilleries in Diageo’s portfolio: Clynelish, Inchgower, Talisker, Oban, Caol Ila and Lagavulin.

Easy to notice there is no Brora this year, nor Port Ellen. Both Brora and Port Ellen will be reopened in the near future so whatever casks available are  probably held back to support the reopening.

Caol Ila is now apparently taking their place, with a premium release. The old grains like this year’s Carsebridge (a lost distillery) are probably also seen as a replacement for Brora and Port Ellen.

The addition of a Talisker 8 Year Old is also interesting as it will be affordable and it could be the Lagavulin 8 strategy, becoming a permanent core range expression later on? More Talisker is always good in any case.

Retail prices for the Special Releases 2018 have been added to the article. The bottles will be available at the end of September 2018.