The third expression in Glenfiddich’s Experimental Series will be a 21 Year Old called Glenfiddich Winter Storm.

After an IPA finish and Project XX, this is an Icewine Cask Finish, finished for six months in French oak casks previously containing icewine from Peller Estate in Niagara. The back label says it is best enjoyed in a frozen glass with a frozen grape. I remember trying a Glen Breton Ice once, a Canadian whisky experiment which was quite nice.

The expression, which comes in a white ceramic bottle, will be released globally in two batches: October 2017 and March 2018. It will be available for around € 230.

Bowmore is working on a new series of three whiskies finished in wine casks, called the Bowmore Vintner’s Trilogy which will be launched in October. Each of the expressions has been matured in ex-bourbon barrels before getting a long finish in wine casks:

During Feis Ile 2017, Hunter Laing will present The Kinship, a series of six whiskies created to mark the start of their Ardnahoe distillery and pay tribute to some of their neighbours on Islay. Each cask was selected by Jim McEwan, who will host two £ 150 tastings at the festival. No info on the price of the bottles – brace positions, everyone. 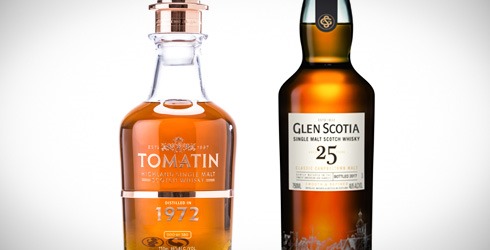 On a smaller note, there’s also an upcoming Tomatin 1972 and Glen Scotia 25 Year Old, which is matured in American oak barrels and bottled at 48.8%.