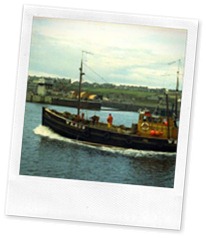 After the travel retail exclusive Old Pulteney WK499 that I picked up in Heathrow last year, a new “duty free” expression is due to be released.

Just like its sibling, Old Pulteney WK209 is named after the registration number of a herring boat called “Good Hope” and based in Wick harbour. In its time, it was a unique boat that was different from all the others.

Contrary to WK499, the new WK209 is matured entirely in first-fill European sherry oak. There’s no age statement on the bottle, but it’s said to contain 8 and 10 year old casks. It is bottled at 46%, non chill-filltered, natural colour and limited to 9600 bottles of 1 litre.

This evening, a handful of bloggers attended a Twitter tasting hosted by Malcolm Waring, distillery manager of Old Pulteney. We tried Old Pulteney 12yo, 17yo and the new WK209. Thanks again Malcolm and Lucas! 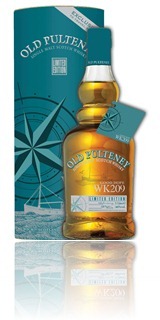 Nose: starts unfresh in my opinion: meaty notes, distinct rubber, even plain sulphur… but other tasters liked that. Anyway it gradually turns towards more traditional sherry notes. Nutty aromas: praline, chestnuts… A hint of sour apples and a little mint. Coastal elements. Leather maybe. Apart from the sulphur problem, I’m missing the attractive freshness and the coherence of the WK499.

WK209 is meant to be a different dram, just like the boat it was named after. They’ve certainly succeeded, but I still prefer WK499 as a more typical and balanced Old Pulteney. WK209 will be available around March for about € 50.